Whether you’re calling it the ‘Great Resignation’, ‘Great Reshuffle’, ‘Great Recognition’, ‘Great Reprioritization’, ‘Great Contemplation’, (the list really does go on and on), one thing is certain — workers are quitting their jobs for an array of reasons: burnout, better opportunities, unhappiness & lack of fulfillment, poor pay, among others.

The Employment Situation: Present & Past We’re all well aware of the impact the pandemic has had on the US workforce. Most of us, if not all, have known someone who has made a job change during these unprecedented times, but let’s begin with December 2021. 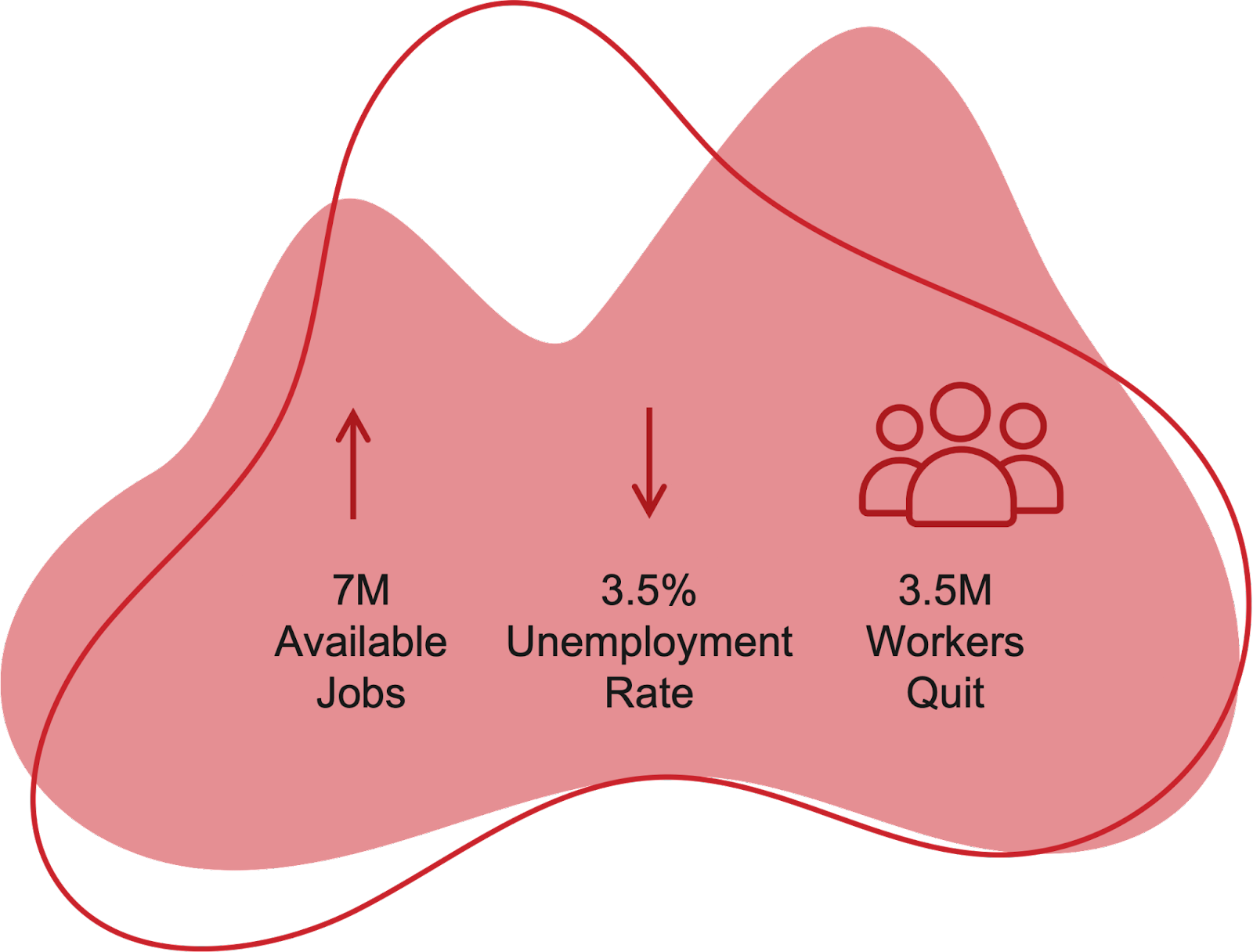 Comparing that to pre-COVID, there’s a staunch difference we’re all, yet again, aware of. In February 2020, 7 million jobs were open in the US, while the unemployment rate was 3.5%. Over 5 million people were unemployed.

But what’s truly intriguing is the case of the shrinking workforce.

What’s with the Shrinking Workforce?

It’s time for a little history lesson on the US Labor Participation rate. Below you’ll find a graph with data regarding the topic beginning in 1990 (when the global labor force participation began to show a steady decline) and now. 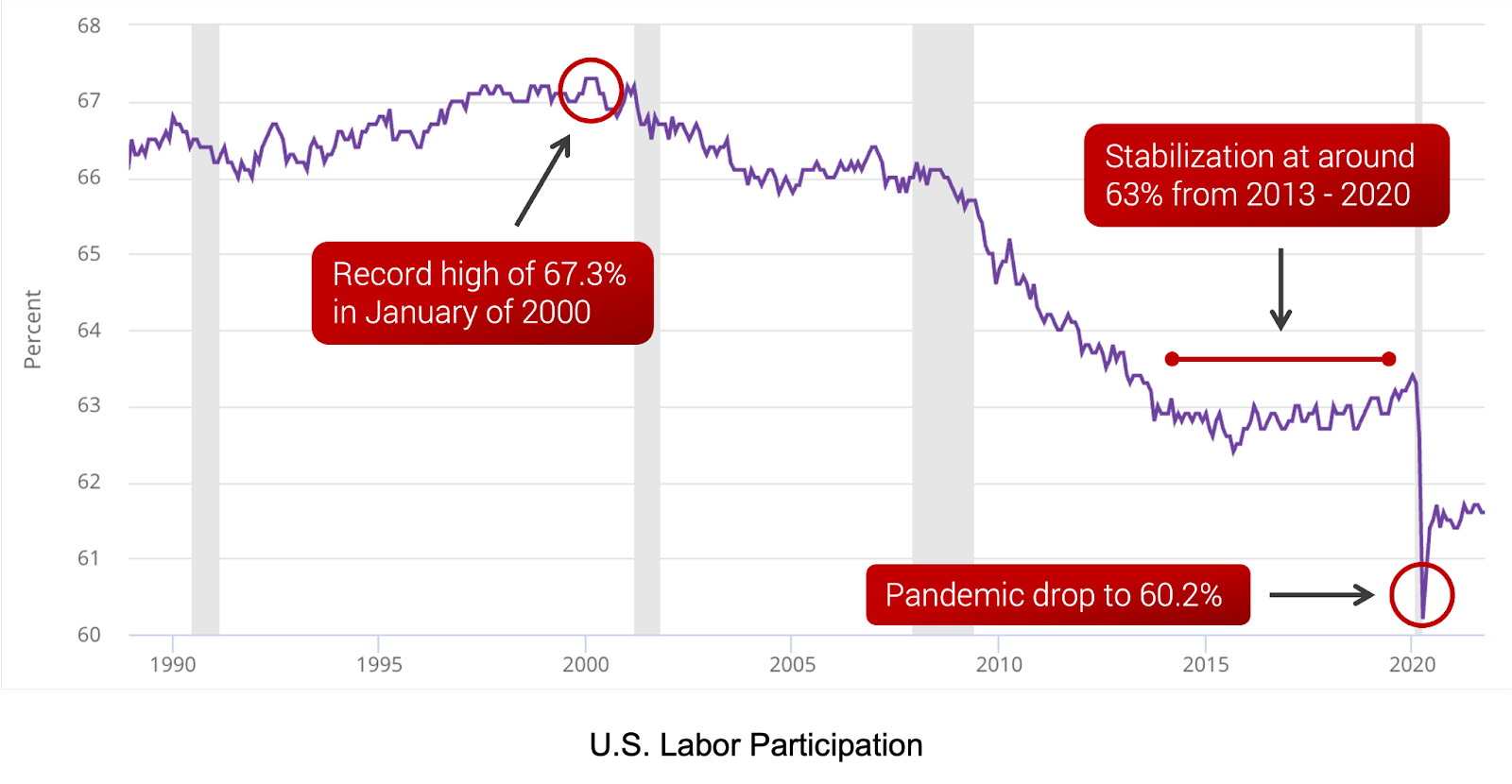 The labor participation rate in the US has been on the decline for decades.

What are the Factors Causing the Workforce to Shrink? 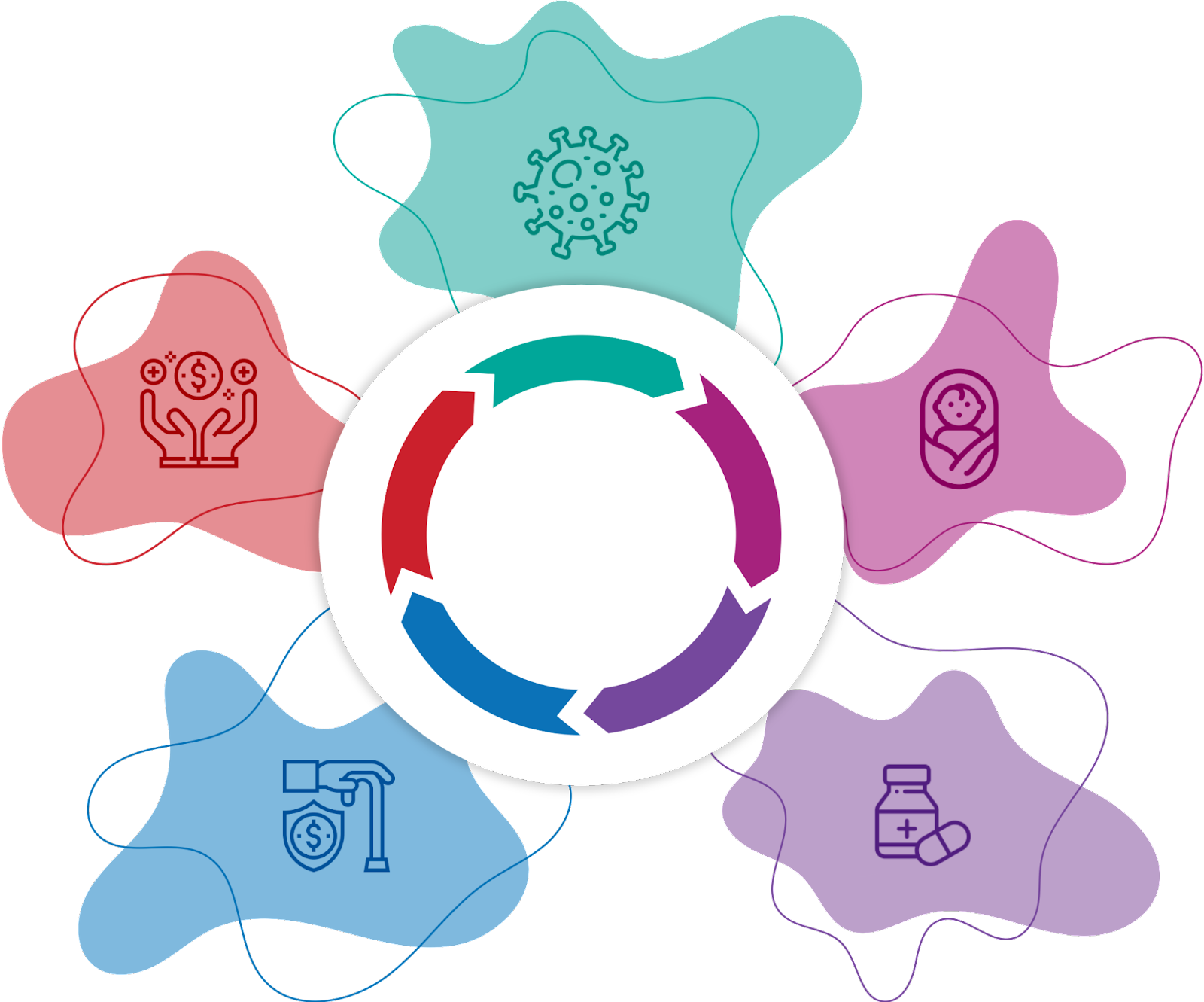 Temporary factors related to COVID like enhanced employee benefits, reduced availability for childcare, and variants certainly help keep the participation rate where it is now. But even before the pandemic happened, the labor force participation rate of the late 2020s was projected to be about 59 percent, a rate not seen since the 1950s and 1960s, before women began to enter the labor force in increasing numbers.

The expanded truth of the matter is that there are other powerful forces reshaping the US labor force. Almost 70% of the 5 million people who have left the labor force during the pandemic were over the age of 55 and they don’t plan on returning. This retirement boom is only the beginning. Other factors include automation of routine jobs, the drug addiction crisis as overdose deaths jumped to 30% in 2020, and a lack of childcare infrastructure.

COVID exacerbated a looming problem. All in all, it’s not about surviving the workforce shortage happening now; it’s about setting yourself up for surviving a new normal and the smaller workforce reality of the future.

How does conversational AI automation for the contact center fit into solving the issue of not having enough workers for all the demand? 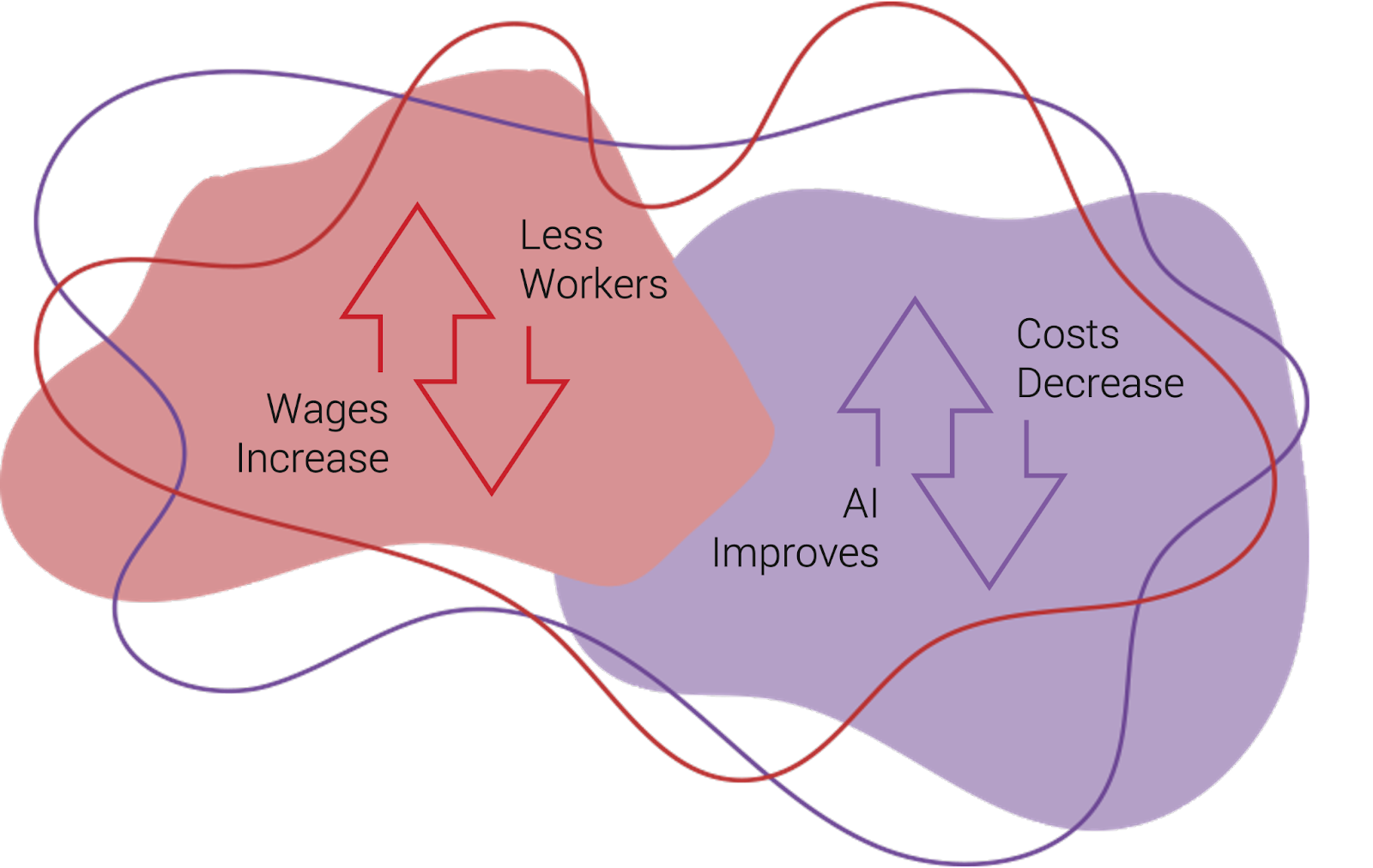 You’re living in the convergence of two macro trends. The impact of fewer workers isn’t one-dimensional — companies have to compete to hire and retain talent. That means offering higher wages to attract potential employees. This is a macro trend working against those that hire.

While this is happening economically, we’re seeing another macro trend: more outstanding technological capabilities and applications for conversational AI. Bots can handle complex interactions with customers in a way they haven’t before. Tools, knowledge sets, and algorithms become available each day to help that happen. The price to invest and utilize this technology is dropping bringing conversational AI automation to the perfect point of adoption. 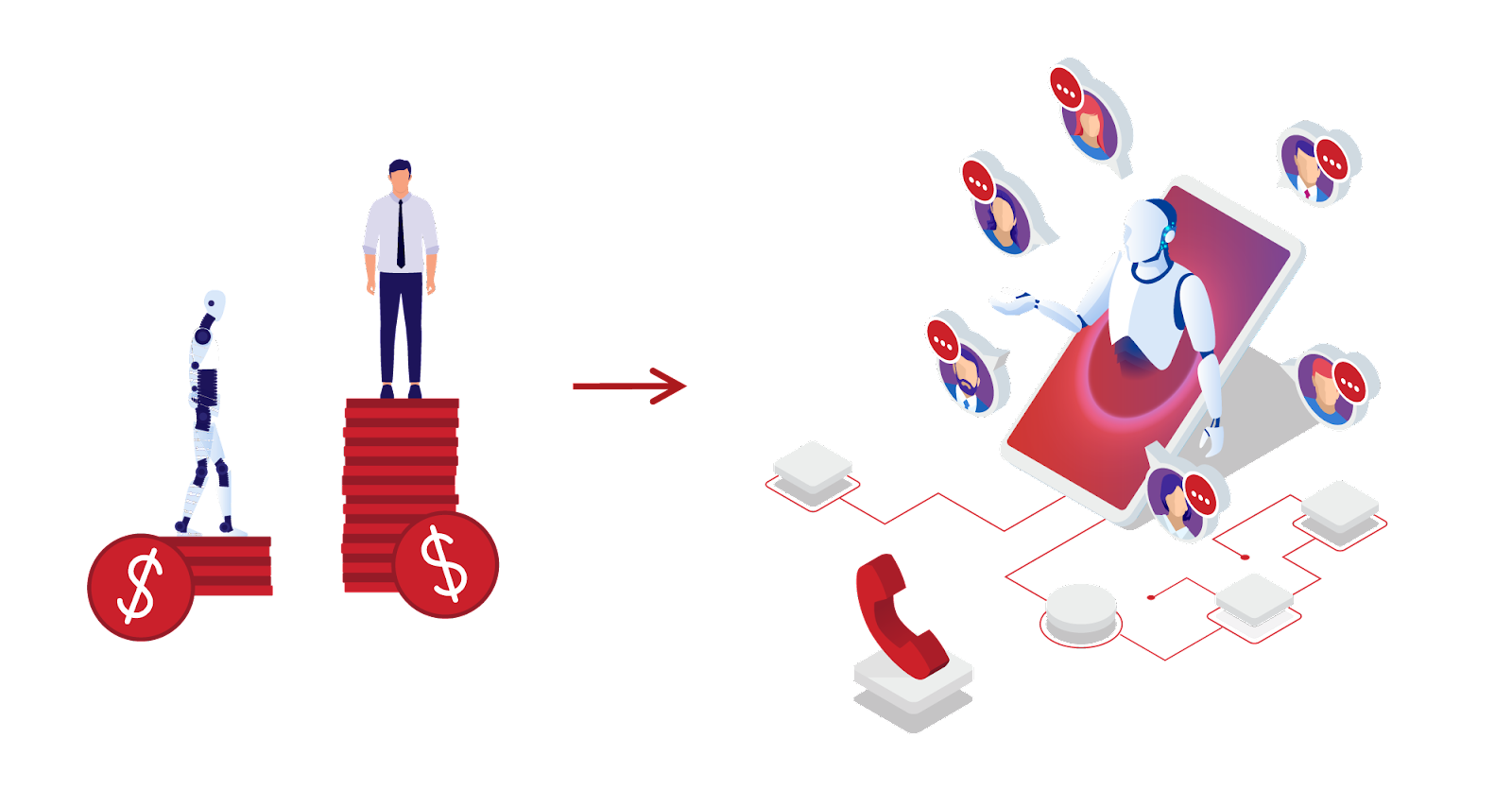 The ROI for conversational AI was always the cost: 1/3 the cost of a live agent. Fast forward to today, companies need more to navigate the realities of a worker’s economy. Since the beginning of the pandemic, the demand has surged for phone support leaving many customers frustrated with hold times. Traditional IVRs aren’t cutting it anymore as the bodies needed to fill in aren’t there to take the calls.

The biggest driver for adopting AI has now transitioned — business continuity is of the utmost importance. With easily scalable virtual agents, hold times are eliminated. Customers are greeted with “How can I help you today?” to self-service for over 100 types of interactions, from the most common to the most nuanced. A live agent deals with anything handled outside of self-service.

Those customer service reps have an assistant within the virtual agent. By starting your conversations with AI, live agents can do what they’re meant to do — handle the interactions that require a human touch. AI takes the brunt of the repetitive nature that contributes to customer service agent burnout. This workflow helps retain talent by removing a frustration that can eventually lead to resignation.

A bonus is the fact that customers skip the repetition as well. Virtual agents authenticate the caller using industry-specific protocols and gather the information required to pass along to the live agent in the event of a transfer or routing.

Conversational AI automation is a technology built to make the worker shortage easy to navigate. By providing customers with always-on voice bots that give them the ability to self-service and offload tons of repetitive interactions, call centers are improving the customer experience and enhancing the work balance for retained live agents. Demand is no longer a frightening and daunting reality. It’s a solved problem.

Where have all the call center agents gone? Watch this on-demand webinar to learn how customer service orgs are handling the labor shortage. For busy contact centers, automating customer service calls can deliver the biggest cost savings. Problem is, it's all too easy to get wrong and deliver a poor customer experience. In this ebook, you'll learn how to overcome the biggest challenges during implementation, the importance of agent training and AI customization, and receive analyst recommendations.

Adding a Chatbot: Trust a Pro or Build it Yourself?

We are here to answer any question you may have about SmartAction.

Most contact centers have an over-reliance on live agents for even the most repetitive and rudimentary calls and chats. With cloud-based virtual agents, you can automate conversations your live agents are handling today without sacrificing an ounce of CX.

Request a demo and hear call samples from your industry!

Please fill out the form to subscribe to SmartAction email updates.

Please fill out the form below.